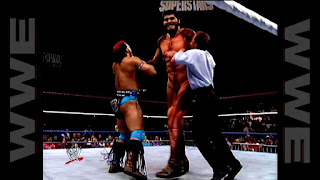 Jorge González (January 31, 1966 - September 22, 2010) was an Argentine basketball player, professional wrestler and actor, better known for his appearances in World Championship Wrestling under the ring name El Gigante between 1989 and 1992 and in the World Wrestling Federation under the ring name Giant González in 1993.

González was born in El Colorado, Formosa, Argentina on January 31, 1966. He suffered from gigantism, which led to his height. He reached a height of 6'4 by the age 14.

González was billed as being 2.45 m (8 ft 0 in), making him the tallest WWE wrestler and Argentine basketball player in history (in reality, while still holding those accolades as the tallest, his true height was 7'7" (231 cm). He started his career with the youths of Hindú Club de Resistencia at the age of 16 (and already 2.19 m (7 ft 2 in) tall). Subsequently, León Najnudel, then coach of the Argentine national team, recommended the board of Gimnasia y Esgrima La Plata to sign the player for the team's Argentine second division roster. During 1986, González helped Gimnasia achieve promotion to the Argentine first division. He then signed for Sport Club Cañadense, but saw little action due to an injury that left him off the court for 9 months.

Coach León Najnudel included González in the Argentine national team that took part of the 1985 South American Basketball Championship (bronze medal) and the 1988 Tournament of the Americas (5th place), where he attracted the attention of the Atlanta Hawks' scouts.

González took part in the 1988 NBA draft, being chosen by the Atlanta Hawks in the third round (#54 selection). Along with Hernán Montenegro (drafted #57), they became the first Argentine players drafted in the NBA. The Hawks bought the player's rights from his Argentine team for a 30,000 Argentine australes fee. However, he was unable to adapt to the physical demands of NBA basketball, partly due to a serious knee injury.

In 1989, Hawks owner Ted Turner offered González a job as a professional wrestler in World Championship Wrestling (WCW), which Turner also owned. After a year of training, González was introduced to fans as El Gigante on May 19, 1990 at the pay-per-view Capital Combat. Wearing shorts, he competed as a fan favorite and billed as being close to eight feet tall.

Over the next two years, he feuded with Ric Flair for the WCW World Heavyweight Championship, participated in a Chamber of Horrors match in 1991 and also had a date on TBS with Missy Hyatt. He also participated in a feud with Sid Vicious and The One Man Gang who both stood at 6'9" (206 cm). The point of the feud was to determine who the real "giant of WCW" was. He also had a cross promotional stint in the New Japan Pro Wrestling (NJPW) promotion before signing with the World Wrestling Federation (WWF) in 1993.

According to Ron Reis, Gonzalez was set to make a return to the company at their 1995 pay-per-view Halloween Havoc in the role of "The Yeti", an insurance policy put in place to make sure Hulk Hogan did not retain the WCW Championship against The Giant. The plan behind his return was to set up an idea Kevin Sullivan (who was the booker of the promotion at the time) had for the pay-per-view World War 3 1995 the following month. It would be a 3 ring, 60 man, over the top rope battle royal, with a giant occupying each of the 3 rings. But the idea fell through as Gonzalez had a diabetes attack backstage at the Halloween Havoc pay-per-view leading him to have to be flown back to his native Argentina and Reis to take his spot in the role.

González competed as Giant Gonzalez during his time in the WWF as a villain, and managed by the dispised manager, Harvey Wippleman. González grew a beard and wore a full body suit that featured airbrushed muscles with bushy hair attached. He was introduced at the Royal Rumble in January 1993, where he eliminated Wippleman's nemesis The Undertaker from the Royal Rumble match despite not being an official participant. At WrestleMania IX, Gonzalez lost to The Undertaker by disqualification after he knocked out the Undertaker using chloroform. After another loss to The Undertaker at SummerSlam, the feud came to an end, and after the match, Wippleman berated him, before Gonzalez turned on Wippleman himself, turning face in the process. Though the foundation was later set for a feud with González and Adam Bomb, it never truly began. His last appearance in WWF was on the October 4 episode of Monday Night Raw in a 20-man battle royal match for the Intercontinental Championship. Before the match started, González was first eliminated by "Macho Man" Randy Savage, Diesel, Bastion Booger, 1-2-3 Kid, Marty Jannetty, Adam Bomb and Bam Bam Bigelow. Three days later, WWF announced that Gonzalez left the company after his WWF contract had expired on October 7, 1993. Unlike WCW, in WWE his height was hyperboled as he was billed as 8 feet despite only being 7 feet and 7 inches.

After his departure from the WWF, González wrestled in the Japanese promotions NJPW and WAR (Wrestle and Romance) until his retirement from wrestling, and used his old ring name El Gigante. His last singles match was on 8 February 1995, when he lost to The Great Muta. On December 8, 1995, González wrestled his final match, teaming with K?ji Kitao in a loss to Shinja and Typhoon by countout.

González played the role of Manny, a carnival sideshow giant in a 1993 episode of Baywatch, who befriends Hobie, but later falls into the water and his large size makes it difficult to be rescued. In 1994, Gonzalez made a short appearance as Eryx the Boxer in Hercules in the Underworld, a television prequel film from the television series Hercules: The Legendary Journeys. González also had roles in the 1993 and 1994 Thunder in Paradise double-episode turned movies.

In December 1995, González retired from professional wrestling due to serious health issues and returned home to Argentina.

After his retirement from wrestling, González lived on a ranch in Argentina in his later years. In October 2009, he was confined to a wheelchair, and also had to use a dialysis machine due to his failing kidneys. González was married and had one step-daughter.

González died due to complications from diabetes and severe heart issues on September 22, 2010, in his hometown of San Martin, Argentina at the age of 44.